This is an excellent book!  A novel aimed at young adults which is the first of an exciting trilogy. 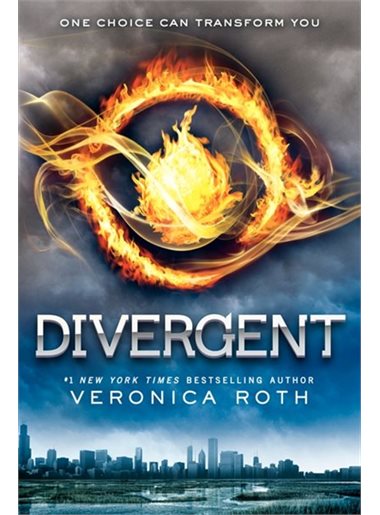 The story is about Beatrice.  She lives in a very strange society which I believe is Chicago in the future (although I don’t think this is spelled out for certain).  In their society people live in ‘factions’, each faction has different attributes.  Candor are honest, Abnegation are selfless, Dauntless are brave, Amity are peaceful and Erudite are clever.  These factions perform different functions in society and mixing between the factions is minimal.  There is also a sixth group ‘the factionless’ these are people who live outside of society in extreme poverty because, for whatever reason, they were cast out of their factions – being factionless is seen as a terrible fate in Beatrice’s world.

At the age of 16 people have to choose which faction they wish to belong to.  Most people remain in the faction they were born into but this is not compulsory if you feel you do not fit it – leaving a faction requires a big sacrifice though as it will mean leaving your family behind for good.  To aid people in their decision they go through a complicated aptitude test which is supposed to reveal beyond doubt where they belong.

Beatrice is born in Abnegation and is torn in the run up to her decision because, although she loves her family, she doesn’t feel it is where she truly belongs.  But she is not sure she truly belongs in any of the other factions either!  She feels her personality is a mixture of different attributes (like a normal person to us!) in her world this is virtually unheard of as in is seen as vital that everyone fits in neatly to a fixed role.

Anyway, Beatrice makes her choice (I won’t spoil it for you) and begins the tough initiation process all teenagers have to go through before being accepted as full members of a faction.  The process is all the more tough for Beatrice as the whole time she has to hide the truth – that she does not fully fit in to any one faction.  Her uniqueness comes in handy however, as being slightly apart from the pack makes her more questioning which helps her spot something very dark brewing in the rigid and regimented culture she lives in.

This is a great story.  I found it very exciting and action packed.  I also loved it because of the parallels drawn with real teenage life.  OK we don’t have to choose a faction for life exactly but we are expected to know who we are and what we want to do with our lives at a very young age.  There is a lot of pressure to fit in and being a person who does not fit easily into an established mould can feel rather isolating – just like life is for Beatrice.

I am looking forward to seeing where the next two books take the characters and the rather sinister world they live in.