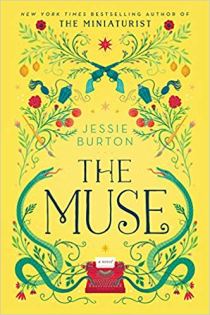 This was a pretty good book, the downside is that I felt it should have been even better.

The action of the story is divided between 1960s London and 1930s Spain.

We begin in London where we meet Odelle.  Odelle is an aspiring writer who has immigrated to London from the West Indies.  After a few unsatisfying years working in a shoe shop she gets a better job as a typist at a top art dealers.  Here she meets the enigmatic and charismatic Marjorie Quick.  The arrival of a mysterious painting upsets Quick and awakens Odelle’s curiosity about both the painting and Quick’s relation to it.  The story then jumps back to 1930s Spain on the eve of Civil War where we find out about the creation of the painting.

In 1930s rural Southern Spain we meet the Schloss family and their brother and sister Spanish servants Teresa and Isaac.  The Schloss family are parents Sarah and Harold and teenage daughter Olive, they are from a British and Austrian background and have just arrived in Spain.  There are a myriad of tensions in this household: Olive is attracted to Isaac and they share an ambition to become artists, Harold is conducting a secret affair that young Teresa accidentally discovers, beautiful and glamourous Sarah suffers from depression and possibly alcoholism, Teresa is drawn to Olive and is jealous of the attention Olive is giving her brother…and on top of all this Civil war is brewing…basically there is a lot going on!

This is quite a plot driven piece and it’s hard to say more without risking spoilers (which I don’t want to do as this is definitely worth reading for yourselves).  The Spanish plot is compelling and keeps you wanting to know what happens next.  But we keep jumping back to the 1960s which is a bit irritating as it is rather dull in comparison.  I don’t think Burton convinced me at any stage of the necessity for Odelle to be in this story, we don’t need her to reveal the 1930s action as the author can tell us that without Odelle discovering clues to what did or didn’t happen.  Odelle has potentially a good story of her own, coming to Britain, facing racism and struggle to establish herself, but this story does not really get room to breathe – if Burton wants to tell that story she should have given Odelle her own book and not tried to shoehorn her into to a story mainly about art and the Spanish Civil War.  Burton tries to imply that the stories of Olive and Odelle are linked as they are both creative young women struggling with their art in different times, but I think each story was strong enough to stand alone and the piece is weakened by trying to slot them together somehow.

I think Burton introduces an interesting situation in Spain with intriguing characters but doesn’t quite develop either characters or plot quite fully enough (I had a similar criticism of the Miniaturist, although I think The Muse is much better).  I felt the book could have been longer and more detailed (not something I often say as I am generally a fan of short books).  It is good, but felt a little rushed and underdone.  Jessie Burton is a good writer through and imaginative – I would definitely read more of her work, I just think she should be more ambitious, there were all the ingredients for a great epic tale here rather than just an enjoyable OK story.